The rocket carrying the unmanned probe took off at 9.08am GMT from the Sriharikota spaceport, close to Chennai.

The gold-coloured probe, which weighs 1,350kg (2,976lb), is about the size of a small car and is being carried by a 350-tonne rocket - much smaller than the US or Russian equivalents. 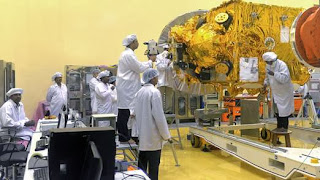 Lacking the power to fly directly, it will orbit Earth for nearly a month, building up enough velocity to break free from its gravitational pull.

Only then will it begin the second stage of its nine-month journey which will test India's scientists to the full.

The Mars Orbiter Mission, known as Mangalyaan, was announced 15 months ago by Prime Minister Manmohan Singh, shortly after a Chinese probe flopped when it failed to leave Earth's atmosphere.

It led to speculation that India was seeking to make a point to its militarily and economically superior neighbour, despite denials from the Indian Space Research Organisation (ISRO).
"We are in competition with ourselves in the areas that we have charted for ourselves," ISRO chairman K Radhakrishnan said last week.

"Each country has its own priorities."

The project comes in at just 4.5bn rupees (£45.5m), but India has been criticised over the cost because the country still has millions of people living in poverty and many children do not have proper access to education.

UK financial aid to India, worth about £200m, is currently being phased out and will end by 2015.
India has said developing space technology can still help its development, such as through satellites which monitor weather or enable communication in remote areas.

Reaching the Red Planet is considered a difficult mission as Mars' orbit means its distance from Earth varies between 31 and 249 million miles.

More than half of all projects have failed, including China's in 2011 and Japan's in 2003.

Only the US, Russia and the European Union have successfully reached the planet.
Nasa, which launches its own $455m (£283m) Maven probe to Mars on November 18, is helping India with communications.

Two ships stationed in the Pacific will also assist with monitoring.

India hopes to find evidence of methane when it reaches the planet.

The existence of the gas would lend weight to the idea of Mars being able to support life, as methane on Earth is mostly produced by micro-organisms.

India has had some success with space missions in recent years and sent its Chandrayaan probe to the Moon in November 2008.

However, it lost contact with the probe the following year.
Posted by science club at 6:22 AM No comments:

1.How 'Parrot Dinosaur' Switched from Four Feet to Two as It Grew

June 28, 2013 — Tracking the growth of dinosaurs and how they changed as they grew is difficult. Using a combination of biomechanical analysis and bone histology, palaeontologists from Beijing, Bristol, and Bonn have shown how one of the best-known dinosaurs switched from four feet to two as it grew.

Psittacosaurus, the 'parrot dinosaur' is known from more than 1000 specimens from the Cretaceous, 100 million years ago, of China and other parts of east Asia. As part of his PhD thesis at the University of Bristol, Qi Zhao, now on the staff of the Institute for Vertebrate Paleontology in Beijing, carried out the intricate study on bones of babies, juveniles and adults.

Dr Zhao said: "Some of the bones from baby Psittacosaurus were only a few millimeters across, so I had to handle them extremely carefully to be able to make useful bone sections. I also had to be sure to cause as little damage to these valuable specimens as possible."

2.Global Warming May Affect Soil Microbe Survival, With Unknown Consequences On Soil Fertility and Erosion
June 27, 2013 — Arizona State University researchers have discovered for the first time that temperature determines where key soil microbes can thrive -- microbes that are critical to forming topsoil crusts in arid lands. And of concern, the scientists predict that in as little as 50 years, global warming may push some of these microbes out of their present stronghold in colder U.S. deserts, with unknown consequences to soil fertility and erosion.


3.Gas-Giant Exoplanets Cling Close to Their Parent Stars
June 27, 2013 — Gemini Observatory's Planet-Finding Campaign finds that, around many types of stars, distant gas-giant planets are rare and prefer to cling close to their parent stars. The impact on theories of planetary formation could be significant.Finding extrasolar planets has become so commonplace that it seems astronomers merely have to look up and another world is discovered. However, results from Gemini Observatory's recently completed Planet-Finding Campaign -- the deepest, most extensive direct imaging survey to date -- show the vast outlying orbital space around many types of stars is largely devoid of gas-giant planets, which apparently tend to dwell close to their parent stars.


4.A Telescope for Your Eye: New Contact Lens Design May Improve Sight of Patients With Macular Degeneration
June 27, 2013 — Contact lenses correct many people's eyesight but do nothing to improve the blurry vision of those suffering from age-related macular degeneration (AMD), the leading cause of blindness among older adults in the western world. That's because simply correcting the eye's focus cannot restore the central vision lost from a retina damaged by AMD. Now a team of researchers from the United States and Switzerland led by University of California San Diego Professor Joseph Ford has created a slim, telescopic contact lens that can switch between normal and magnified vision. With refinements, the system could offer AMD patients a relatively unobtrusive way to enhance their vision.

Visual aids that magnify incoming light help AMD patients see by spreading light around to undamaged parts of the retina. These optical magnifiers can assist patients with a variety of important everyday tasks such as reading, identification of faces, and self-care. But these aids have not gained widespread acceptance because they either use bulky spectacle-mounted telescopes that interfere with social interactions, or micro-telescopes that require surgery to implant into the patient's eye.

Posted by science club at 10:51 PM No comments:

Email ThisBlogThis!Share to TwitterShare to FacebookShare to Pinterest
Is time traveling possible.Check out this link which opens up a new concept about time traveling.
http://www.spaceanswers.com/futuretech/1260/is-time-travel-possible-with-stephen-hawkings-light-speed-train-it-just-might-be/
Posted by science club at 10:31 PM No comments:

1. The 11 Times Trick
We all know the trick when multiplying by ten – add 0 to the end of the number, but did you know there is an equally easy trick for multiplying a two digit number by 11? This is it:

Take the original number and imagine a space between the two digits (in this example we will use 52:

Now add the two numbers together and put them in the middle:

If the numbers in the middle add up to a 2 digit number, just insert the second number and add 1 to the first:


2. Quick Square
If you need to square a 2 digit number ending in 5, you can do so very easily with this trick. Mulitply the first digit by itself + 1, and put 25 on the end. That is all!


3. Multiply by 5
Most people memorize the 5 times tables very easily, but when you get in to larger numbers it gets more complex – or does it? This trick is super easy.

Take any number, then divide it by 2 (in other words, halve the number). If the result is whole, add a 0 at the end. If it is not, ignore the remainder and add a 5 at the end. It works everytime:

Posted by science club at 8:39 AM No comments:

The decision to designate the year 2012 CE as National Mathematics Year was announced by Dr Manmohan Singh, Prime Minister of India, during the inaugural ceremony of the celebrations to mark the 125th birth anniversary of Srinivasa Ramanujan held at the Madras University Centenary Auditorium on 26 February 2012. The Prime Minister also announced that December 22 would be celebrated as National Mathematics Day from 2012 on.

An Organising Committee with Professor M.S. Raghunathan, President of the Ramanujan Mathematical Society as chair, and Professor Dinesh Singh, Secretary of the Ramanujan Mathematical Society as secretary, has been formed to formulate and implement programmes and projects as part of the observance of the National Mathematics Year. A National Committee with Minister for Human Resource Development Kapil Sibal as the chair supervises the activities of the Organising Committee.[5]
[edit]
National Mathematics Year in Nigeria

In Nigeria, the various activities planned as part of the celebration of National Mathematics Year would be centred around the theme Mathematics: The Key to Transformation. The events were inaugurated on 1 March 2012 at a function in Musa Yar’adua Dome, Abuja. Thirteen projects of national importance are planned as part of the celebrations.
Posted by science club at 8:33 AM No comments: